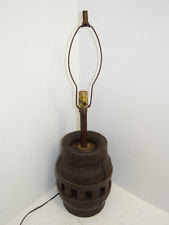 It was a mistake happened in a split second.  The lamp shade, I just removed of a table lamp slipped off my hand; fell onto the floor and crashed in a jingling. How I watched sadly, the shade was turning into a white net of shards. The dust that had gathered on its surface had rendered the lamp a dead, fearsome look.  So I was prompted to give it a facelift.
I was also earnestly trying to help my aunt in secret.  But, if my aunt got a clue of what I was intending, I was sure, she wouldn't have allowed me. The lamp, my uncle told was his family heirloom, so had lots of sentimental values attached to it more than its material value.  His great uncle got it from Vas co Dagama's yacht; his story went like that. I never believed him. My point was, how could he discard a thing of much sentimental value in the corner of the passageway to gather dust? Only when visitors came, he got my aunt to dust it and display on his table.  The following week, some guests were coming, and my aunt had to clean it.
So that afternoon when my aunt was taking a little nap, after lunch, I went upstairs.  I was a guest in her home.  I liked visiting her on every school holidays. She too had got to looking forward to welcoming me.
I lifted the lamp from the clutter of the untidy goodies, unscrewed the shade and plunged a soft brush into its inner cavity turned it in a swinging motion.  Then it decided to disobey me and crashed onto the ground. Maybe years of neglect and lack of care in the owner's hand might have taken it to a suicidal point, and I had only assisted it in accomplishing that. I looked at the net of shards asking, 'do I  like a suicide assistant? Huh!'
I was a little panic when I thought about the many consequences visiting the house as a result of my action. An important one, the blame for the assisted suicide falling on to my aunt.  Of course, the person who ruled how she suffered the consequences was my uncle, her husband.  Oh my God! I wish I could tell, how much I hated him!
He was the cruellest man I have ever seen.  Equally cunning, corrupt and callous.  And he was the municipal chairperson in our area.  How he got into that position was a matter of secrecy.  Perhaps one day somebody declassified its old documents; they, his secrets might see some light. So what? By then he would be corrupting the Gods in the heavens! He's a charismatic personality.  There were tens of men and women working under him whose pastime was to organise workshops to how to do corruption without being caught.  And when the public complained, they all looked the other way.
They exchanged gifts; rolls of currency notes or foreign made gifts.  Using the gifts, my uncle started constructing a new hotel in the city.
However, he would never look the other way, when his wife and children committed any mistake.  I remember very well, how he threw my aunt on to the wall of the dining hall as punishment for dropping a drinking glass onto the floor.  Her blood immediately stamped a mark on the wall and in the impact of the hit she fell, and it took some time for her to find her feet.  The first thing she did when came on her feet was wiping the mark off the wall using a swab. By that, she wiped off her shame fearing her visitors finding a reason to insult her.  But she never could wipe off the fears it caused in her mind. It remained there, perhaps forever.
I had the strongest wish to break his neck and save aunty from his barbaric behaviour, forever.  But, I was only sixteen.  What could I have done to a man who looked like a towering mountain?  So I dropped the plan.
So every time I visited my aunt on school vacation, I did things that would bring some smile on her face.  My uncle and aunt had four kids.  All four my uncle’s clones regarding cruelty and cunningness.  They got thrashed by their father every day.  I knew they also have plans to kill him.  But their plans were different; though I never asked them for the details.  I hated all of them.
So first thing first: I should destroy the evidence.  Hide away the shards somewhere for no one would detect.  Throwing it into the waste bin wasn’t an option, it would be quickly discovered by the maid or even by anyone else in the home.
I heaped up the shards into an old newspaper making slow strokes around them using a dust brush. After swaddling it carefully into a shapeless bundle, I wrapped the headless lamp in another sheet.  When nothing remained of it, I assumed, my uncle would forget it.
There were Nannagadi like pickle-pots in the underground cellar of the house. They were old discarded ones, having no chance that something thrown into its stomach would find detection. With both the paper packets, I sneaked into the cellar.  Groped in the thick sheets of its cold floor.  A window up on the wall threw in a little sun into the room. When I reached the pickle-pot, I stood up feeling its height and lowered the bundle deep into its stomach and crawled out.
Day 2 for the Write Tribe festival of words #5