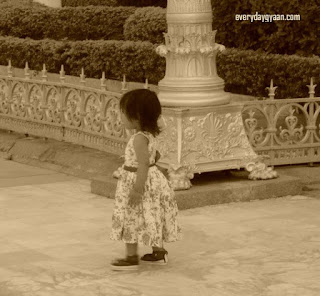 The car screeched into the parking lot at a high speed and stopped haphazardly. Not straightening its position for fellow drivers' convenience, she stepped out of it and walked in the direction of the building close by. The building wasn't causing any interest in her. Not because of its dull quaint appearance, but because it was a police station.

She had been lucky so far. Never had to step inside a police station, that brutal world, only  seen the outside of one or two standing far away.  That brought us to the point that her fears were not drawn out of any firsthand experiences. But the tell-tale stories were all over. Just read the newspapers and the Facebook posts. Men not officially charged with any offences were beaten up within its four walls, and women reporting offences were raped even using bayonets and guns.

Her feet thumped hurriedly on the dirty path to the building and at its end, she climbed up a flight of  cement steps to reach a narrow open space. Two flower pots mounted in the two corners of the open space lavished hydrangea bunches at their zenith.

The open space led her to a room, which had plastic chairs kept against walls. She sat down on one of them, looking expectedly at the lady at the counter hardly one meter away in front of her. The lady was busy on a telephone call. When she was done with it, dropped the receiver, and looked at her with raised eyebrows.

"I have a complaint to make."
She led her inside with her beckoning finger.

Inside, she found another counter, but no one attending it.  She stood by it, recounting inside her head the brutality narrated in the newspapers, and hesitating to sit down on a chair that she found empty.

She opened the file that was in her hand, glanced through the photograph in one of its sleeves. The photograph of her child. She smiled while her eyes floated on her white dress, beautifully sprigged with green flowers.  The green belt, matched in style with her slender build up. She had the sweetest smile on eqarth on her most endearing face. A sigh escaped her throat and joined the humid air in the room. She extended her fingers to touch her loose hairs which felt she was ruffling them.

She heard heavy footsteps followed that a policeman appeared at the counter. A man of heavy build up and an impulsive face. She wasn't able to face the dart in his bloodshot eyes.  She bridled hard her urge to run away, clamped her mouth with one hand and lowered her head.  She was about to cry when another policeman came in to talk to her.

"Can I help you?" He asked. The kind look in his brown eyes was assuring.

"My daughter, she's missing." She handed over the file to him. He looked at the little girl's picture with attention.

Busy steps thudded in to interrupt him. An elderly man lunged into the room, gripped her hand, and grabbed the file from the policeman.

"Go away, " she told the man, scuffling with him, and loosening her hands away from his grip.

"The child isn't missing, she lost her to her estranged husband in a custody battle." The elderly man explained to the policeman.

"I missed her." She raised her voice and refused to be pulled away by the man. "I want to talk to him," her voice droned as the elderly man applied force on her.

"Let her talk." The policeman said. The elderly man looked at him angrily, but he loosened his grip.
In the newly felt confidence, she moved to the counter.  She grabbed the file from the elderly man and gave it to the police man.
"Can you see, this is my child, she is missing! Will you please help me to find her." The policeman looked at her, held the file in his hand and looked at the photograph once more.
"I will," he said.
The elderly man pulled both her hands.
"No, I don't want to come with you. I want to stay here," she resisted his pull moving her body toward the counter.
"Look, I'll find out your daughter, soon. Now you may go with him." The police man said.
"Promise." She held her hand forward.
"Promise." The policeman touched her hand.
She smiled. Soon the elderly man pushed her out of the room.